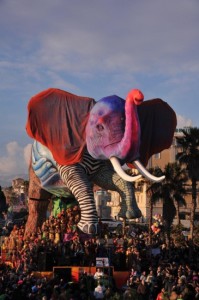 History
The tradition of the parade in Viareggio dates back to 1873, when a few rich families decided to dress up in protest against the excessive fees that were forced to pay. Since then every year this show eliminates the discontent of many people and at the end of the century, appeared in the triumphal wagons.
World War I seems to destroy the Carnival in Viareggio, which instead turned out to be more beautiful and grand. The event resumed in 1921 and floats paraded on two wonderful sea avenues. During the third millennium is expected big news with the wagons of cards that are enriched with new technologies to create increasingly complex movements and effects.

The Viareggio Carnival is considered one of the most important carnivals in Italy and Europe.
The carts, which are the largest and most lively of the world, parading along the promenade of Viareggio. The Viareggio Carnival is not only the most spectacular Italian feast, but it is artistic and organizational skills of the Italians in the world. The third show of the 2009 broke all records, were in fact more than 250,000 people to applaud the wagons of cards that have marched along the promenade of Viareggio.

Wards and Tradition
Everything is accompanied by the Carnival balls and masquerades that have ancient origins, long before the birth of masked. In the ’20s were famous for the balls ‘color’, parties in which women had to wear a suit of colors indicated, while the men wore tuxedos, the decorations, confetti and streamers in the colors were laid down. Spaces as the Prince of Piedmont, and the Royal Hotel on the Promenade Cafe chantant Margaret were the ideal forum for such parties and the latter in his local in 1932 began the tradition of the party in costume with a “dance of the eighteenth century powdered “.

“Cittadella”
The new headquarters building of the floats, the complex of the Citadel, was inaugurated on December 15, 2001 according to the design of Francesco Tomassi. It is located in the north of the town, the wagons are in hangars that can be visited by groups and individuals not only during the carnival period. In addition, this complex is also a center of culture and entertainment, with open spaces that can be used all year: the elliptical piazza bounded by the same hangar is a great location for concerts and other events, it was in fact used for the traditional Festival Gaber Dedicated to artist and numerous concerts, musicals and world-class throughout the summer. Inside however was made a museum and a guided tour on the history of carnival in Viareggio. On May 13, 2010 the City Council of Viareggio, in order to cover the cost of the municipal budget for 2010, authorized the sale of the Citadel of the Carnival to a bank with a simultaneous leasing Foundation Carnival of Viareggio.